As we “Race for Vocations,” we get the opportunity to “Prayer for Vocations:”   My Knights of Columbus council prays for vocations at the conclusion of every meeting.

“Heavenly Father, bless Your Church with an abundance of holy and zealous priests, deacons, brothers and sisters.  Give those You have called to the married state, and those You have chosen to live as single persons in the world, the special graces that their lives require.  Form us all in the likeness of Your Son, so that in Him, with Him, and through Him, we may love You more deeply, and serve You more faithfully, always and everywhere, With Mary, we ask this through Christ our Lord.  Amen.”

As my spiritual journey continues, albeit at a much slower pace than I like, the above prayer has become more significant and meaningful to me.  Likewise, I have incorporated prayer into my running and other outdoor fitness activities.

My first Indianapolis Mini-marathon was in May 1981.  I gladly accepted a challenge from a co-worker to run a half marathon, and have been hooked on running since.  I can recall saying a prayer at the start of most running races or triathlons, but I did not routinely pray during the race, triathlon, or on training runs and rides.  Sure, I pleaded with Jesus to get me through the race I was participating in at the time, but nothing serious.  The first exception, however, was in August 2011 when I was nervously waiting to jump in the Ohio River to start the swim portion of the Ironman (IM) Louisville triathlon.  The time trial swim start was delayed for several minutes as race and medical officials attended to an athlete who experienced a medical emergency.  Once they resumed the time trial swim start, I was in the water within seconds for the beginning of my first IM triathlon.  Now, I was even more anxious and nervous about what I was getting myself into that day.  Immediately after entering the river for my 2.4-mile swim, I prayed a portion of the Rosary for this athlete and his family that he would be okay, as well as the safety of all athletes participating in IM Louisville that day.  The following year at IM Louisville, I repeated praying part of the Rosary during the swim portion of that year’s Ironman Louisville triathlon in memory of that athlete who died while swimming in IM Louisville in August 2011, and for the safety of the other triathletes.

About seven months later, things really changed for me.  This major change occurred in March 2013 during a training run for last year’s mini-marathon.  It happened on a Saturday morning while running trails at Eagle Creek Park in Indianapolis.  The prior weekend, I had attended the Christ Renews His Parish (CRHP) retreat at St. Malachy, and then our parish mission the following four evenings.  As a result of these two awesome events, I was on a spiritual high.  The next Saturday after the CRHP retreat and the parish mission was a gorgeous morning with the sun reflecting off the reservoir waters.  Running along a ridge, I caught myself staring at the sparkling water and reflecting on this spiritual high that I was experiencing.  That particular morning, the trees appeared more distinct, the birds sang more clearly and loudly, and the woods seemed more peaceful than usual.  I caught myself in prayer with Jesus letting Him know how thankful I was to be running freely in such a beautiful setting.  It was if I was in conversation with Jesus and letting him know about all of the details from my CRHP experiences and my thoughts from the parish mission.  Beginning that Saturday morning last spring, I started praying the rosary in its entirety on training runs, during marathons, while cycling and during all three disciplines of the IM triathlon.  Sometimes, I would pray the entire rosary three or four times during a particular event.

As I continue on with my fitness related activities with a renewed focus on prayer, I think about how inspiring it would be to participate in group runs while praying the rosary out loud.  This idea of group “rosary-running” was from an October 28, 2006, article that I recently read from Catholic Exchange (http://catholicexchange.com/running -the-rosary).  The author mentions the benefits of saying the rosary with others rather than alone.  He also describes the incredible support that a well-known runner (Alberto Salazar) received while he was praying the rosary out loud during a difficult period of a 53.75-mile ultra-marathon in South Africa in 1994.  Salazar said, “The crowd saw that I was humbled and could actually see there was a higher force working within me, and not only did they start to cheer, many even began praying the rosary with me.”  Salazar won that race in 1994 which was his first ultra-marathon.

Good luck with your training for the upcoming Indianapolis 500 Festival Mini-marathon or 5k race, and feel free to bring Mary along with you during your training and big event!  Running has positively impacted my life over the years, as well as being a member of the Race for Vocations team.  Although it has taken me several years, I have finally included our Blessed Mother, Mary, as a regular and reliable partner on my training runs and races.  What would really be motivating and supporting is an Indianapolis Rosary Running group.  Perhaps we can start such a running group in the near future. 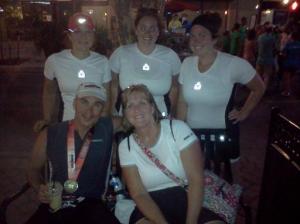 Rick Rader and his family belong to St. Malachy in Brownsburg.  He ran his first Indianapolis 500 Festival Mini-marathon in 1981 based on a challenge from a co-worker.  His most unique experience with the mini-marathon was when he was deployed to Afghanistan with the Indiana National Guard in 2005 and helped organize a simultaneous running of the mini-marathon at Camp Phoenix in Kabul, Afghanistan.

"I have competed well; I have finished the race; I have kept the faith." 2 Timothy 4:7

Sponsored by the Indiana State Council Knights of Columbus